In my last post, "System, Memory and Network Forensic Analysis with Log2timeline and Splunk" I explained the steps to create a supertimeline from a system timeline, memory timeline and network traffic. Later one, the CSV supertimeline file was imported into Splunk in order to analyse the incident. Now ,it is time to get the hands dirty with Splunk :)

In the case of this scenario we do not have any additional information from the incident, like for example an IDS alert, a proxy alert, or anything else which could give us some hint to investigate.  As I am totally blind, I am going to start looking for the network traffic, checking the DNS traffic as first step.

To do this I run a Splunk query with some regex to extract the time when the DNS query was done and the domain. The output will be a simple table: 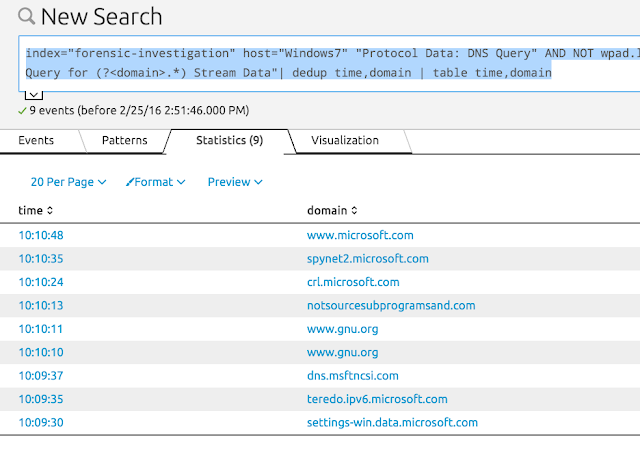 From that list, all the domains sound familiar to me, with the exception of "NOTSOURCESUBPROGRAMSAND.COM".  That DNS request was done at 10:10:13

When doing a whois for that domain I see already something interesting:

This domain has been registered a few days ago.

Next step, is to search in Splunk for that domain. I filter all the DNS traffic as I am not interested in them. Also, I sort the output in order to have the oldest events as first one in Splunk.

There are several events, and I can see that at 10:10:13 there is a GET for the resource /images/xI_2F7hUY_2BB9o1_2Bly/pegPJtllMxlWViBX/iy10bO2UTfO1Bpt/MEKH0Qs2n7fQbaMGtz/hM7vE8kkL/7Cmu7B0_2FvgdtMMauEo/awWdt4rt7gTmIpwu_2F/NpOEejTs_2FewiNuRTqkUE/yVvWmOAwDDOBceeqCqk/zt6.gif 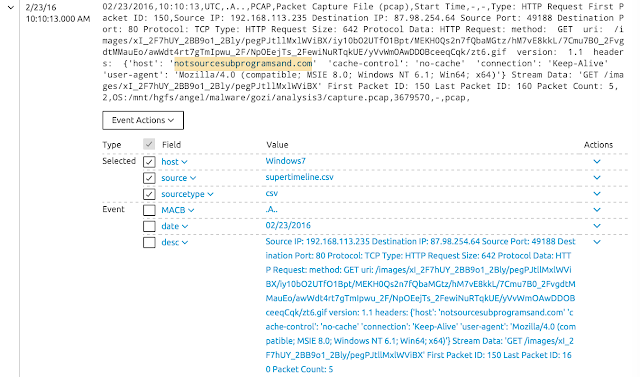 The next step is to check all the events involving that IP. I discard the traffic I already now, like DNS, or HTTP GET.

This HTTP conversation looks like kind of C&C communication, so I will take the time 10:10:14 as my initial reference time. I am going to check what happened before that moment. For that, I run a query in splunk with a specific time frame (10 minutes in the past)

Still there are 508 events in that time frame. This is quite a lot information :)

Let's try to look first to any interesting network activity, besides the HTTP connection discussed before. I run a query in Splunk in order to create a table with all the connections in that time frame.

The connection is an HTTP GET request to www.gnu.org/licenses/gpl.txt at 10:10:12.
This could be normal behaviour, but also could be something to take into consideration. This malware family is known to access some valid websites to gather some files, usually TXT file, as the 'seed' for their DGA algorithm. This is described in this post http://www.govcert.admin.ch/blog/18/gozi-isfb-when-a-bug-really-is-a-feature

For the same timeframe, I am going to filter for the events produced in the filesytem, as I already analysed the network part. Dependent on this I will take a look to the memory or just will focus on the file system. Those filter are create with the "filename" which reference to the source of the data.

Unfortunately, there is only one event, which is related to a JOB from Chrome, in order to update the browser. This doesn't look related to our incident. It is also a bit far away from the time (10:02:00) I was expecting to have some strange behaviour.


Next step, is to check from the memory the "exe" files executed in that time frame. Maybe this way I am able to detect something anomalous.

I find 396 events, so I am going to try to filter the ones which I think could be normal executables from the OS. It is possible that doing this I filter some malicious process which is using the same name than a valid executable, like for example svchost.exe. Some malware use techniques to hide in valid executables. However, usually the initial infection binary has a different name so it would be easy to catch and detect through this approach.

I run the same query than before but filtering some well known binaries: svchost.exe, taskhost.exe, Wireshark.exe, vmtoolsd.exe.

The first result I get is something really interesting:


What do we know so far?